Good day readers, hope this finds you all well. Today we are going to be looking at the Innokin Adept Mod we will go over the specs and features of the mod and what my personal opinion is on the mod itself. 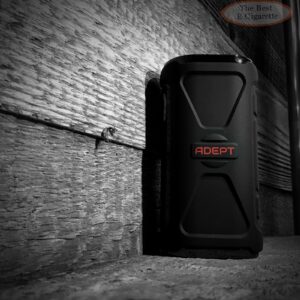 Specs of the Adept

The Adept Mod is a 3000mAh battery with a max output of 17w, that wasn’t a typo, that is the max output of this mod, which seems weird but this is, after all, an MTL device, originally paired with the Zlide tank from Innokin which is the successor to the Zenith tank. So considering the mAh and max wattage output of the mod, you can imagine that this will be an absolute powerhouse of a mod to use. The mod is also made from IP67 materials which means that the device is shockproof, waterproof and dustproof which is a contender in the whole indestructible mods available currently. The resistance range of the mod is from 0.4-3.0Ohm which means that those who want to use low resistance coils with this mode are not going to be able to use them. It stands around 85mm tall and about 44mm wide which means its not overally bulky but more bulky than the average MTL kit.

Looking at the mod, we are greeted with a silicone looking matriel which is held together by a polished metal plate at the top and bottom of the mod. At the front of the mod we have the controls and fire button, the fire button is a decent size and in my opinion quite clicky as ive stated before is a major bonus when im looking for an ideal mod. At the bottom of the mod there is another button which is also fairly big and clicky, we will get into the features of this button in the next section and at the bottom of the mod youll see the charge port which uses a Micro USB port and is cover with a snug bung to protect the port from dust and water. Just below the USB port, youll see a few numbers which are devided into two groups, the group on the left goes from 11-14w whilst the group on the right is 14-17w, again this will be explained in the feautres of the numbers in the next section.

Overall i think the mod itself is good looking, when it comes to comfort, ive got to say it is comfotable and snug, its not to bulky like some mods ive had but again has a good size to it as well, when it stacks up againist another mod like the Aegis Legend which is made from the same materials, i find it is alot nice in the hand with the adept compared to the Aegis Legend.

To turn the Adept device on/off, press the fire button three times, when using the device, it uses bright LED lights to indicate battery life and power settings along with the strange looking symbols youll have noticed under the mod itself (<] & [>) these represent the type of coil you have. With the Adept mod, there is an onboard dection system available which will pick up what the resistance the coil is, if its above 1.oOhm, it will use the 11-14w scale, if its below 1.0Ohm, it will use the 14-17w. Do remember the minimum resistance of the mod is 0.4ohm which means anything below that wont fire due to the regulators that are also installed on the device. To change the wattage on the device, simply press the button at the bottom and cycle through the different wattages.

So with the Adept, its clear to see that this is a MTL device, although the Zlide is the original tank to go with this device, ive been using the GS Dirve tank rated at 0.75ohm and it works great, its good to see theres a mod now with high mAh which is bulit for the MTL community in mind, my only real criticism on this is that i would of loved to see this mod use a Type-C Port as aposed to a Micro USB Port, with the Type-C, it would have been more efficent at charging the device meaning you wouldnt have to wait as long for it to be fully charged to use. Other than that, i can see why you wouldnt want the Adept, its sleek, comfrotable and an all around solid device to use as a daily driver.

Thanks again for reading

This review was written by Cal

Lockdown 2.0 - How are we operating? We are officially back in lockdown! Stay s...