Hello and welcome back to another blog post. This week I thought we would look at the VPR Range we have in stock and walk through the flavours and how I found them to be. So let’s dive right in!

The VPR 100ml Range can be found on our website, just click the link here or at the bottom of the review. 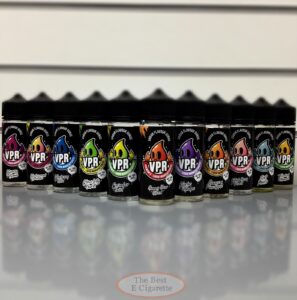 Currently we have 12 flavours to choose from in the VPR range:

Berry Bomb: This flavour is a good strong mix of berries which in my opinion is delightful. One thing I didn’t expect with this flavour is the cool hit of menthol. Although I was shocked as there was nothing to indicate any inclusion of menthol/coolant, this was a great surprise for me as I love a cool blast in my e-liquids. The menthol compliments the berries perfectly, giving it that icy, chilled after taste. The only downside I would say is it doesn’t say anywhere on the bottle that there is menthol included which could be seen as a negative as some people don’t like it.

Blackcurrant Lemonade: The Blackcurrant lemonade is exactly what I thought it would be; a real ripe, earthy blackcurrant taste followed by a zesty, fizzy lemonade. A nice and simple flavour that really works well and makes for a great all day vape.

Blueberry Blitz: Quite the heavy hitter when it comes to blueberry flavours. For saying it’s just straight up blueberry it was so bold and deep flavour which I did enjoy quite a bit. Fresh, sweet and juicy are three words I would say describe this blueberry and I thoroughly enjoyed it.

Citrus Jelly Burst: Not as sour as I expected but still plenty zesty. Lots of zing from the lemons and limes with a very pleasant gummy candy taste mixed in there to take the edge off. For me it’s important that citrus flavours aren’t too overpowering, so the ‘Jelly’ aspect of this flavour is pivotal in rounding it off and providing a lovely sweetness to the lemon & lime.

Cucumber Twist: As strange as this combination sounds, I was very eager to try it I’ve never had a cucumber flavoured e-liquid; it’s refreshing to see someone try something different and ‘out there’. There’s no denying there is a strong cucumber flavour but it’s accompanied by a squeeze of lemon and lime to create a surprisingly fresh vape. This wouldn’t be my first choice but it caught me off guard with how much I enjoyed it.

Gummy Bear Blood: This is a blood orange gummy bear which I was very excited to try. It’s quite a sweet flavour as you’d probably expect from a gummy bear, and similar to the Citrus Jelly Burst I feel this is necessary to a point to ensure the blood orange isn’t too dominant. However, I do love orange flavours and think VPR could have been a bit more subtle on the gummy with this one as the orange is toned down just a tad too much for my personal preference. It would still be an ideal flavour for someone who loves their sweeties though!

Kyoho Grape: The greatest grape I’ve had in a while. I can’t say I’d heard of the Kyoho grape before this, but after looking into it, it’s a Japanese black grape known for its natural sweetness and juiciness. I can confirm that it tastes exactly as described! You get the strong flavour from the black grape which is mellowed off by just the right amount of sweetness. Sometimes when I’ve had grape flavours I have found them to give an artificial taste, but with this, the flavour is full and natural which is of course exactly what you want from a flavour.

Mango & Pineapple: Such a good combination of flavours here that are always going to work together. For me it’s a perfect balance of the two; neither flavour is too strong and they come together to make a delightful tropical e-liquid.

Melon Madness: I’m generally quite unfussy when it comes to flavours, but in all honesty I’m not a massive fan of melon so I was a bit apprehensive about trying this one. There was definitely plenty of flavour in there though. The best way to describe it would be like a layered vape; so I tasted honeydew first, then cantaloupe, then watermelon. It was quite impressive that they achieved this to be honest, but like I say it was probably wasted on me as I don’t like melon! There’s also what feels like a tiny amount of Koolada in there, but not too much where it makes the flavour really cold, it just gives it a bit of freshness which I suppose goes well with melons.

Pink Berry Peach: The Pink Berry Peach is a blend of strawberries and peaches which come together to make a subtle, well balanced flavour. This won’t blow your socks off with overwhelming flavour, but that’s a positive for some people. I found it enjoyable.

Soft Mints: If you like your mint-based liquids then this is the one to go for. I would say soft mints are usually more subtle on the mint, however I predominantly tasted peppermint with this one which reminded me more of those strong Wrigley’s mints (this wasn’t a bad thing for me at all as I love strong mints). You still get that sort of candy sweetness aftertaste as expected from soft mints which is great, but you also get an icy kick (presumably from Koolada) on top of the peppermint so it’s definitely stronger than your average soft mint. This was one of my favourites by far.

Tropical Thunder: Now this flavour is definitely on the sweet side of life. When you first open the lid it almost smells too strong, as if you’re about to vape a concentrated cordial, but when it’s in your tank this is not the case. It’s really hard to pinpoint exactly what fruits are in this one. The main one I can identify is pineapple, then the rest of the tropical fruits just seem to come together in perfect harmony to form a juicy, sweet, and outright tasty concoction! It surprised me at how much I liked it for saying I couldn’t really put my finger on any fruits. It was just so moreish and the flavour didn’t drop off at all!

As I said further up, I’m not really fussy when it comes to E-Liquid, but despite this I was still not expecting to enjoy every single flavour. I think this range uses a lot of concentrated flavour to ensure it’s nice and punchy with minimal flavour drop off, which I can imagine will appeal to a lot of people. There’s a lot of choice too which is brilliant; with some simple flavours, some complex, and some really different ones, it shouldn’t be hard to find one that tickles your fancy.

Click the link to check out the full range now!

Geekvape Aegis Boost Back once again with another review on the highly anticipa...

VPR - Full Range Review Hello and welcome back to another blog post. This week ...